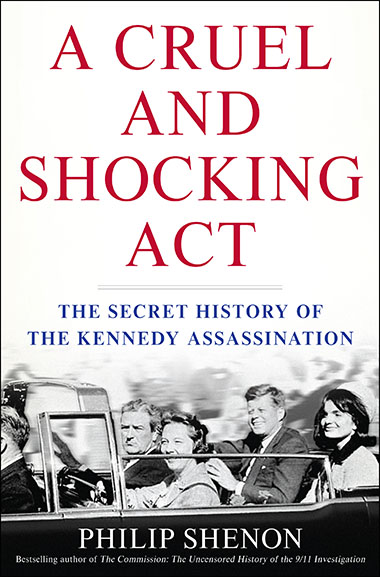 “Remarkable new advance in the JFK cold case … May at last be the answer to the real mystery of the Kennedy assassination… Merits the Pulitzer Prize and the thanks of a grateful nation.”— Ron Rosenbaum, Slate.

“A Cruel and Shocking Act has authority, is tantalizingly readable and is convincing in its claim that the Warren Commission was unable or unwilling to uncover the truth … The one to read.”–The Wall Street Journal

“Just might change the way you think about the assassination and the flawed investigation that followed.”–Boston Magazine

“This masterful piece of modern history … A Cruel and Shocking Act contains more revelations than can be written here. And given the short, thriller-like chapters, they would feel like spoilers … Deep reporting … It is a sober, gripping study.”—The Independent (U.K.)

“Just in time for the 50th anniversary of the Kennedy assassination comes this startling book, which deepens the case for conspiracy while turning some existing conspiracy theories on their heads.”—Kirkus Reviews

“The book reveals how the investigation was immediately overtaken by the very government agencies — the CIA, the FBI and Secret Service — that had the most to hide … Juicy and informative details that shed new light on the JFK assassination.” — Salon

“Sober and powerful book … The combination of destroyed records, unpursued investigative leads and lies by government officials, ‘most especially at the CIA,’ will leave most reasonable readers unsettled.” — Publishers Weekly

“Disturbing because it is so convincing … The evidence (Shenon) assembles is frightening.”–The Columbus (Ohio) Dispatch

“With meticulous rigour and the sure-handed storytelling of a gifted thriller writer, Shenon charts how the FBI, the CIA and the Secret Service entrusted with guarding the president all scrambled hard to destroy evidence … Shenon has unearthed sensational details.” — Metro (U.K.)

“I love this book. It is a terrific read. It is a shocking new book shedding light on the investigation into President John F. Kennedy’s assassination.” — Lou Dobbs, Lou Dobbs Tonight, Fox Business

“Shenon’s impressive book on the JFK assassination and the making of the Warren Report. He documents the extent to which agencies and actors in those days withheld and even destroyed information that should have gone to the Warren Commission.” — Peggy Noonan, The Wall Street Journal

“A persuasive, deeply researched account … jaw-dropping scenes involving the destruction and manipulation of evidence … A compelling read … A book that is one part ‘Mad Men’ and one part James Bond.” — The Washington Post

“Shenon has done a magnificent job of investigating and connecting the dots … An incredible book … There have been secrets kept for 50 years.” — Bob Schieffer, Face the Nation, CBS News

The questions have haunted our nation for half a century: Was the President killed by a single gunman? Was Lee Harvey Oswald part of a conspiracy? Did the Warren Commission discover the whole truth of what happened on November 22, 1963?

Philip Shenon, a veteran investigative journalist who spent most of his career at the New York Times, finally provides many of the answers.

In a work of history that will make headlines, New York Times reporter Philip Shenon investigates the investigation of 9/11 and tells the inside story of the most significant federal commission since the Warren Commission. From the Commission's inception, Shenon covered its workings on a daily basis, developing sources at all levels of the investigation. Now, more than five years later, he has returned to those sources and uncovered important information which casts a new light on what the Commission discovered - and failed to discover. Read more